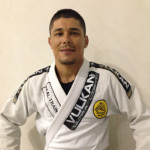 Tiago Ferreira arrived in Sydney in 2007. He’d already been a Brazilian jiu jitsu black belt for 4 years when he landed in the new country at a time when mixed martial arts was really starting to take off in Australia. Ferriera hails as a student of the Gracie Ji Jitsu Academy in Brazil, unquestionably the world’s most prestigious school for this style of martial arts.

Before deciding that Jiu Jitsu was for him, a young Tiago tried Kung Fu at the age of 8 before changing to Karate at age 9. At age ten he tried Judo and from age eleven to thirteen it was all Taekwondo. As a young teenager growing up in Brazil, he first saw the UFC when he was 13. Royce Gracie had just won a world title, proving the fact that Jiu Jitsu is a superior martial art form. Tiago was hooked.

In 1992 Tiago started training at Gracie Florianopolis, Brazil, under the masters Rilion Gracie and Crolim Gracie. In 2000 Tiago trained with Rickson Gracie in California, USA, by this time he was already a purple belt. After training as a brown belt for three years Tiago was awarded his black belt from Crolim Gracie in 2005 and for the remainder of his time in Brazil he was training hard, teaching and also competing.

Tiago founded the ‘Gracie Central Coast Jiu Jitsu Academy’ in 2009 and is now a Professor of Jiu Jitsu, teaching hundreds of students each week the art and beauty of Brazilian Jiu Jitsu.

Tiago still fights and competes – training up to 3 times a day before major competitions.

He eats well and focuses on a balanced diet that is necessary to fueling his body for the rigours and demands of his sport. His philosophy for his sport is simple – “Give your best in every session and you will fight well. Train hard fight easy.“